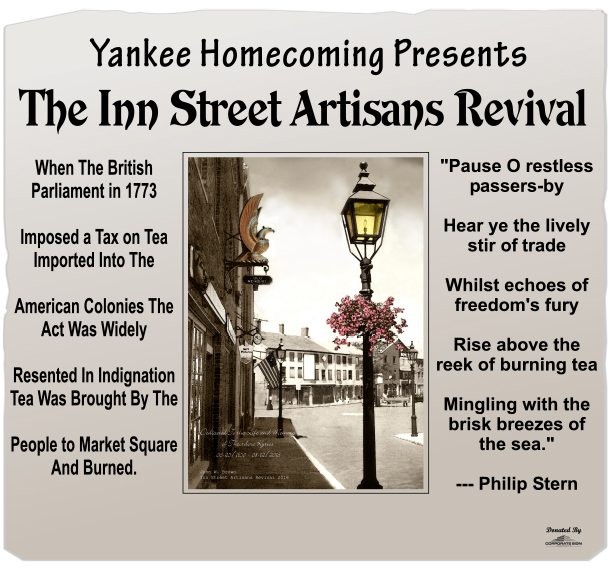 Dear Friends of the Revival,
You are receiving this update because you have participated in the Artisans Revival or interested in the event movement. If you would like to be removed from this mailing list, please reply with ‘REMOVE’ in the subject line. Thank you.
In this update;
* Labor Day wrap
* Harvest Festival/Inn Street
* 2017 Summation
* Whats Next?
* Links and Blogs
* See You Next Year!
Labor Day
I’ve wanted to get an update out regarding the status of the Artisans Revival. As you know, the first Artisans Revival show, beyond that of Yankee Homecoming, took place during the Labor Day weekend. It was a huge success in many ways. While the Riverfront concert raged on Saturday, so did Inn Street. There was a constant flow of traffic with many vendors reporting above average sales, while others were basking in exposure on a great summer’s day. Sunday was a wash out due to the remnants of Hurricane Harvey, but Monday the sun and crowds were back. It was the first time in over six years that an independent artisan show took place downtown and with the surrounding brick and mortar business reporting an uptick in sales during the weekend along with high praise for all the artisans! The original intent for doing the show was to ‘tap in’ to the ‘built in crowds that are generated from other events and festivals, and prove that the surrounding retail business CAN benefit as long as the events were planned and executed correctly as a place to stop and smell the roses, mingle, and shop.
In addition we were able to raise $790.00 for Titus Blade Steele. Here is a quick snipit of my conversation with Titus;

Hi John how you doing l hope that all is well, thanks many times to you friend

you are a martyr the truth Saint
thanks titus, but im just someone that wants to make a difference, thats all.
i hope the money will help you make a difference at this stage in your life, even though you have made a big difference in the work you have done in Newburyport over the years.
call it paying it forward…or ‘payback’ if you will ; )

Hello thank you very much, you are an awesome friend, and I promise you God is watching everything you do

Hi titus. So the money was transferred out of my account. Please confirm you have received it on your end.

Good l have received the funds, you are awesome, Thanks

a million
There was also another $650.00 collected to assist me in creating the Artisans Revival Market on Inn Street.
Artisans Revival Market Place
https://www.gofundme.com/artisansrevival
The Artisans Revival seeks to create a self sustaining market and economic source for the city and local artisans, as well as assisting other artisans in need.
I thank all who have supported and contributed to these projects. They will continue to be ongoing and accepting donations for the foreseeable future. Any additional donations would be greatly appreciated.
My agenda at this point is to continue to directly approach the Chamber of Commerce as well as the city to sit down and to further discuss ways in which artisans, residents, visitors, brick and mortar business, AND the city can ALL benefit from ways in which demonstrate community collaboration and involvement with artisans shows and festivals. THIS is what the Artisans Revival is all about, and we will continue working towards this goal.
Columbus Day
The developing plan for this year was to continue to sponsor our own show on Columbus Day weekend to coincide with the Chambers ‘Harvest Festival’, at least on Saturday. Then perhaps do a Holiday Show in November.
However, my personal plans have changed.
I will continue to participate in this years Harvest Festival on October 8th and 9th via my vendors license for Inn Street. But that will be it beyond those dates. I will NOT be organizing a coinciding an Artisans Revival show for Columbus Day weekend, nor at any point for the rest of the year. This will be my last appearance on Inn Street for 2017. My focus now will turn from Newburyport to Boston for the City Hall Plaza Winter Holiday Market beginning on November 24th and running through December 31, 2017.
Boston Winter Holiday Market Show
http://bostonwinter.org/

http://www.thebostoncalendar.com/events/boston-winter-city-hall-skating-path-holiday-market
Beyond that, and if successful in Boston, I will then continue to attempt to establish a southern market somewhere along the eastern seaboard during the winter months before returning to Inn Street in the Spring.
2017 Summation and whats next for 2018?
On the flip side, we have had a fantastic year for artisans in Newburyport during 2017. Because of our involvement and the redrafting of the city vendors license ordinance, the city will now have four vendors license available in 2018 on Inn Street, with NO LESS THAN TWO DESIGNATED LICENSES for ARTISANS for the first time in the city’s history!
This is a very big deal because I believe this acts as the foundation for a year round artisans market. I believe these licenses will be successful and will lead to more designated licenses specifically for artisans on Inn Street. Inn Street has come a long way but still has a way to go. The underutilized areas of Inn Street need to be utilized by something other than the overflow of a playground for kids in order to balance out the area and make it conducive for adults and shoppers seeing it serves as the heart of the downtown shopping district. Without the artisans , Inn Street has become nothing more than a million dollar playground that contributes nothing more to the local economy of the area other than an ice cream cone and children’s playground. Nothing against children’s playgrounds, but when that is your only option for a major ‘pedestrian mall’ and shopping district downtown, then the local retail district id effected negatively.
I will be submitting an event plan by the end of the year to the City Council calling for multiple Artisan Shows in the spring  of 2018, as well as organizing the third annual Yankee Homecoming Artisans Revival. Other plans will call for both the second annual Labor Day Artisans market show, as well as an expanded Harvest Festival Artisans Revival show during Columbus Day weekend.
All of this will be aimed at creating a year round Inn Street Artisasn market.
For more information and to continue to keep tabs on progress, please stay tuned to the Spirit of Newburyport blog as well as the artisans revival facebook page!
Spirit of Newburyport Blog;
https://spiritofnewburyport.wordpress.com/
Artisans Revival Facebook page;
https://www.facebook.com/ArtisansRevival/
If anyone has any questions or comments please dont hesiate to write or call anytime!
You can find more information on the history of the Artisans Revival in the links below.
Once again I would like to take this opportunity to thank all who have participated, supported and contributed to the Artisans Revival in 2017. Thank you!
Hope to see you at the Harvest Festival or at the Boston Holiday Winter Market!
If not, have a great rest of the year and See You in The Spring!