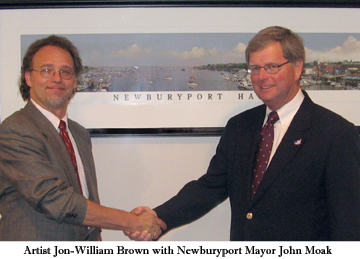 The Spirit of Newburyport opened its first Signature Gallery on April 29, 2006 at 49 Water Street during Newburyport’s first ArtWalk of the season. John Moak was the Mayor of Newburyport at the time. In July, I did one of my first outdoor art shows at Brown’s Square, right across from City Hall. At one point during the show the Mayor came across the street and purchased one of my prints, my first rendition of ‘Market Square Summer’.

He told me it was a gift from the city for Senator Ted Kennedy who was going to be in town for the Yankee Homecoming festival finale. I told him I couldn’t have been more humbled and honored.

On July 29th, 2006, Sen. Ted Kennedy recited ‘Fanfare for the Common Man’ with the Symphony by the Sea at the Newburyport Yankee Homecoming. Shortly after his performance at the waterfront stage, he was escorted to his limousine. Right before he was to depart, I could see mayor Moak and his wife hand him the wrapped picture, and shake his hand.

I can still remember watching him driving away, while echoes of the symphony and ‘Fanfare for the Common Man’ still echoed in my mind. I believe it was the last time Senator Ted Kennedy came to town. I wonder sometimes where that picture is now.

I went on to be commissioned by the Essex Street Inn in June of 2007 for their new ten room addition and conference center. Mayor Moak had shown up for the ribbon cutting ceremony. That’s where the above picture was taken. A couple years later I was to add two larger murals in the Main Lobby. Between the two buildings there are over 25 pictures still adorning the walls of the Inn.

Over the years I have had the distinct pleasure and honor to adorn several offices and buildings in and around the Newburyport community including the new Avita center at the Anna Jaques hospital last year. For me, nothing can be more satisfying knowing that my work brings not only a sense of beauty, but a feeling of affinity with the community to those that dwell within it. That ever-longing sense of ‘home’.

On April 23rd, 2016, I celebrated ten years in business as the Spirit of Newburyport by officially opening a new Gallery at 32 Water Street during the first Newburyport Artwalk of the 2016 season, as I did ten years ago in 2006. The best part was seeing my Brother and his family walk through the door with my Dad. I knew my Mom was there too. She’s still my biggest fan, and wouldn’t have missed it for the world.

I owe a ton of gratitude for all those that have helped and supported my work over the years, and for that I thank you from the bottom of my heart. You know who you are. I only hope that the next ten years I can give back, but a portion of what you have given me.

By any account, and no matter the consequences, it was a milestone for me. And nothing will ever take that away from me now.

Fanfare for the Common Man

Outside in the madding crowd
He laughs along the way
Traffic city, what a pity
It doesn’t have a word to say

Troubled people, billions of people
They can’t seem to understand
The ringing ears are unable to hear
The sounds of the natural plan